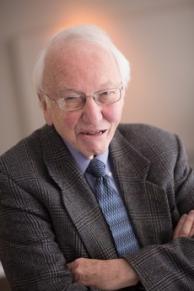 Oral cholera vaccine (OCV) can decrease the severity of a cholera outbreak, reduce rates of disease in endemic settings, and prevent cholera during humanitarian crises and emergencies. Listen to the conversation or read the transcripts below to hear Dr. David Sack, M.D., the Director of the Delivering Oral Vaccine Effectively (DOVE) project and professor of International Health at the Johns Hopkins Bloomberg School of Public Health, discuss the history of OCV and the potential for a single dose vaccine.

Dr. Sack recently appeared as a guest lecturer for the online course, Current Issues in Public Health, at the Johns Hopkins Bloomberg School of Public Health. As part of the course, students had the opportunity to submit questions for Dr. Sack online.The audio and transcripts below capture the conversation between Dr. David Sack, Dr. Edyth Schoenrich, and the Teaching Assistant as Dr. Sack answers students’ questions.

Q: Before this lecture, I did not know there was an oral vaccine for cholera. This seems to be something that’s not really on the radar for not only public health students, but also experts in public health and government. What’s the main reason for this resistance?

David Sack: Don’t feel bad. This is very common, unfortunately, even among very knowledgeable policy makers. Public health professionals have a lot on their plate – they’re dealing with all kinds of issues and cholera seems to be a detail among the many problems they deal with. I think particularly, public health workers oftentimes spend so much time on the administration of public health that new developments like this can go by and they miss it. Don’t feel bad. But on the other hand, there needs to be ways to inform people that these opportunities do exist.

Q: You said that there’s a difference between efficacy and the public health piece. Can you talk a little more about that?

DS: Maybe I can illustrate that with a statement that came from WHO after the first trial of this oral cholera vaccine. We did a trial of the oral cholera vaccine in 1985, so by 1990, we had the results of that and the efficacy was in the neighborhood of 70% for 3 years. The statement that was made then by WHO was that this vaccine did not have sufficiently high efficacy to be of public health benefit. Now, if you dissect that sentence, it’s internally inconsistent. What I mean is that efficacy and public health benefit are two different things. How do you measure public health benefit? It’s through the number of cases averted, the number of lives saved, that’s the public health benefit. Efficacy is an evaluation in a particular setting of how much the rate was decreased as a result of the vaccine. In fact, the major determinants of a public health benefit would be things like predicting cost benefit – how much does the vaccine cost, what is the rate of disease etc. If it’s a very common disease then a vaccine that has relatively lower efficacy still might prevent a huge number of cases. That’s certainly the case with Rotavirus vaccine right now. Where in developing countries it’s only about a 50% vaccine. But the disease is so common that even saving 50% is a huge benefit. That’s the case now we are thinking about with Malaria vaccine that maybe 30%. And yet they are still thinking about implementing that. So, efficacy and public health benefit are really two different outcomes. They’re both important but efficacy is not the only thing.

Q: Can you walk us back to 1985 where you said you were working on this oral vaccine and by 1990, had discovered that this was potentially something that could be very useful; yet it’s not until 2010 that the WHO said yes, this is something we’d like to recommend that people use on a global scale. What happened during that 25-year span?

DS: You wish you could go back and say, “Are you guys crazy? Why didn’t we do this?” Number one: it took money. The vaccine that we used in 1985 still had problems. One of the students asked what about Dukoral, which actually does provide some protection against the toxigenic E.Coli. The problem with that one is it’s more expensive so that makes it less cost-effective. The major problem is that it includes the binding subunit of the cholera toxin. So it provides protection against both the bacterial wall as well as the toxin. That’s good and it has this cross-protection against the toxigenic E.Coli. It’s acid-labile – if you drink it without a buffer, it gets destroyed in your stomach; so, you need to give it with a buffer and that buffer just adds to the logistical complications. It’s just not practical to think you can use this on a large-scale.

Q: Another question that came up a couple times was this idea of natural disasters and types of diseases we see that come out of that. One example mentioned was the earthquake in Haiti and seeing cholera come out (afterward). We do know that certain things like this are going to happen after natural disasters. Is cholera vaccine part of a response in natural disasters or is this something that’s being talked about as being a regular response?

DS: Certainly we’re trying to improve our ability to predict high-risk settings. So, I think simply because you have an earthquake or a flood doesn’t necessarily mean that your risk for cholera goes up. If there’s a history of cholera in the area, if the flood is associated with total deterioration of water sanitation, each one of these elements when they go up…if you then have a collapse of the medical care system, each one of these things adds to the risk. I’ll give you an example – you’re probably aware that there’s been an ongoing civil war in South Sudan and huge numbers of people are in internally displaced camps, the water sanitation is very bad, flooding was occurring, and that was a setting where there was a decision to preemptively vaccinate the camps. Shortly thereafter, a cholera outbreak did occur and the people in the camps were pretty much protected. It was a very wise decision and it was an example of where it showed the power of the vaccine in really benefiting the people in the camps.

Q: How long are you protected once you’ve had the vaccine?

DS: The study in Kolkata showed five years. We did have some discussion about use of the single dose and we know that single dose can protect, we don’t know the duration for single dose. If it’s given as the standard two doses, it did protect for five years.

Q: Is there, on the horizon, a chance that this would change the one-dose? Are there studies being done to show that this might be as efficacious or efficacious enough to do one-dose?

DS: We need more evidence to change that and I think rather than changing the general recommendation, it’s more of a question of when is a single-dose appropriate and when is a two-dose appropriate? I think we’re going to learn more in certain situations, particularly an outbreak in an area where you don’t normally have outbreaks, a single-dose may be enough that you don’t need long-term protection you just need to control the outbreak as opposed to a place like Bangladesh where you do need longer-term protection. So there you may need at least 2 doses. And we still haven’t worked out how to administer booster doses so that’s another question.

Dr. David Sack, M.D, is a professor of International Health at the Johns Hopkins Bloomberg School of Public Health. He has spent his career devoted to the control of infectious diarrheal diseases like cholera, rotavirus, and diarrhea due to enterotoxigenic E. coli. In addition to directing the Delivering Oral Vaccine Effectively (DOVE) project, he is also head of the Enteric Laboratory at the Johns Hopkins University Center for Immunization Research, which carries out clinical trials of new enteric vaccines.