Among the many affected by cholera throughout Yemen, these infected children lie on the ground in a hospital in Sanaa. Photo: KHALED ABDULLAH/REUTERS/Newscom

An article in the World Health Organization (WHO) August Weekly Epidemiological Record (WER) reported that since the creation of the global stockpile for oral cholera vaccine (OCV) in 2013, 55 campaigns have been conducted using nearly 13 million doses [1]. A majority of the OCV doses (73%), were used in emergency settings, while 27% were used in non-emergency settings to control endemic cholera. The report described OCV deployments in terms of the setting, targeted populations, campaign timelines, and coverage. The increasing trend in OCV use in affected countries is an achievement that the WHO can be proud of. 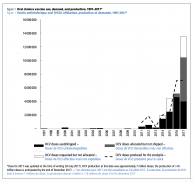 Despite these achievements, we also need to be aware of the emergency situations where OCV was not deployed. Take for example the recent cholera outbreak that began in Yemen in October 2016. The outbreak started to decline a few months after the peak but later resurged in April 2017 following a Saudi airstrike intervention in the Yemeni Civil War [2]. As of August 2017, a cumulative total of 500,000 cholera cases have been reported [3]. One million doses of the vaccine had been allocated from the global stockpile and immunizations had been set to begin in July 2017 but the vaccination campaign was suspended [4]. The article in the WER makes no mention of the Yemeni situation [1].

Reporting the successful OCV campaigns, as in the WER report [1], is useful for recognizing what is running well, for documenting progress made and for motivation towards continued efforts. But analyzing failure to deploy the vaccine, especially in settings of humanitarian crisis, is arguably even more important. In the Yemeni situation, could the plan to deploy OCV have been made earlier? Could the misconceptions and misinformation that potentially clouded some of the choices have been cleared up? Was there any part of the decision-making process that could have been improved? Answering these questions could increase our understanding of what was tried and what could be improved.

Additionally, it would be important to know how many applications for vaccine from the stockpile were made overall (as a measure of global demand), how many were granted, how many were denied and the reasons for denying vaccine requests. Guidelines on how to access oral cholera vaccine from the stockpile and a description of the composition and management role of the International Coordinating Group (ICG), are available online [5]. For increased clarity and transparency, we suggest that the details of the decision-making process for each application also be available online. To draw real lessons, both successful and unsuccessful deployments should be publicly discussed.

[1] Pezzoli L on behalf of the Oral Cholera Vaccine Working Group of the Global Task Force on Cholera Control. WHO Weekly epidemiological record; 2017: 92, 437–52.