How a Surging Stockpile of Vaccines Could Help Conquer Cholera

As stocks of oral cholera vaccine rise, mass campaigns, like this one in South Sudan in 2014, become more feasible. Photo: AFP/STRINGER/GETTY IMAGES

Around the world, cholera is on the march. In Yemen, which is mired in a civil war, the devastating waterborne illness has sickened more than a million people since October 2016 and continues to spread. Outbreaks are ravaging Zambia, Tanzania, Zimbabwe, and several other African countries. Haiti is still suffering from an epidemic that began in 2010. And last month, after torrential rains flooded parts of Kinshasa, the capital of the Democratic Republic of the Congo (DRC), cases spiked there. "For reasons we do not understand, cholera seems to go through cycles of severe seasons," says David Sack, an infectious disease expert at Johns Hopkins University's Bloomberg School of Public Health in Baltimore, Maryland.

But a countermeasure is gaining momentum as well. A vaccine against Vibrio cholerae, the causative bacterium, has been around for 20 years, but questions have long swirled about its usefulness in outbreaks, and it has been in short supply. That is changing. The global cholera vaccine stockpile, established by the World Health Organization (WHO) and partners in 2013, has attracted additional manufacturers, and now an easier to use formulation should help health workers respond to outbreaks. Many think this may be the year in which the stockpile starts to reduce cholera's overall toll. "We are reaching an extremely important point where the scale of the campaigns may be sufficiently large to show impact in controlling the disease," says Francisco Luquero, an epidemiologist with Doctors without Borders in Geneva, Switzerland.

In 2013, only about 200,000 doses from the 2-million-dose stockpile were shipped. But as the vaccine has become an option, demand has soared and manufacturers have increased their output. Last year, more than 12 million doses were shipped—and many more were requested by affected countries.

About 2.4 million doses will soon be sent to the DRC, where the current outbreak is the worst in 20 years. That's enough to vaccinate 1.2 million of the country's most at-risk people, and, experts hope, enough to curb the outbreak there. "Kinshasa is definitely my No. 1 concern right now," says Dominique Legros, a cholera expert at WHO in Geneva.

The campaign in Kinshasa will use the new vaccine formulation called Euvichol-Plus, which started shipping early this year. The vaccine is delivered in small plastic tubes rather than glass vials, making it easier to distribute. "It's 25% cheaper, 30% less volume, and 50% less weight," says Seth Berkley, head of Gavi, the Vaccine Alliance in Geneva, which is funding the stockpile. "I think that it is a game changer," Luquero says. "It is clearly making vaccination even more feasible in the conditions where we work." In another improvement over current vaccines, which are most effective in adults, new vaccines in the works may also protect children under 5.

Mass vaccinations were long seen as too slow to stop fast-moving cholera outbreaks, and many worried they could distract aid workers from treating patients and providing clean drinking water. Studies in Haiti, Guinea, and other countries are confirming that large campaigns are feasible, safe, and effective in outbreaks, while other evidence suggests available doses can be stretched when supplies run short. Recent studies in Bangladesh and Sudan suggest that a single dose confers almost the same protection in the short term as the customary two doses. A report this week in The New England Journal of Medicine on a 2016 vaccination campaign in Zambia bolsters that case. The researchers compared 66 people who had cholera with 330 healthy controls and calculated that a single dose offered about 89% protection. "What you gain from the second dose in terms of protection may be marginal," says Luquero, one of the study authors. WHO's Strategic Advisory Group of Experts on Immunization has green-lighted the use of a single dose in emergency settings. 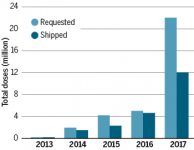 A surging stockpile: Demand for cholera vaccine from the global stockpile has soared since it was established in 2013. Supply has grown rapidly with it. Photo: J. YOU/Science Magazine

A bigger change may be coming. To date, cholera vaccine, like the other two vaccines in the stockpile for yellow fever and meningitis A, has been used mostly reactively, to stop an outbreak once it begins. But Gavi funding for the stockpile for 2014 to 2018 also included money for some preventive campaigns with the aim of "strengthening the evidence base for periodic, preemptive campaigns." In November, Gavi's board is set to decide whether the alliance will start funding the routine use of cholera vaccines in places where the disease is endemic, such as Bangladesh. That could massively increase the demand for vaccine, creating a further incentive for manufacturers.

Routine vaccination could have global benefits as well. An analysis of hundreds of cholera genomes last year showed that outbreaks in Africa and Latin America originate again and again from introductions of Asian strains. Vaccinating against cholera in Asia could help keep the disease from spreading to other continents, Sack says. "In the long run, we want to prevent outbreaks, not just reduce the severity of outbreaks after they have started."

No one thinks improved vaccines or a bigger stockpile will be a panacea. In conflict-torn places such as Yemen, vaccines don't help if vaccinators cannot reach those who need them. And more important, cholera could be vanquished worldwide if everyone had access to safe drinking water. The United Nations estimates that 2 billion people do not.