“Why is this outbreak different from others?” An Interview with Waqo Boru, Epidemiologist, Field Epidemiology and Laboratory Training Program, Ministry of Health Kenya 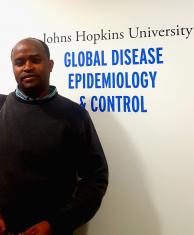 Mr. Waqo Boru, BSc, MSc is an Epidemiologist with the Field Epidemiology and Laboratory Training Program at the Ministry of Health in Kenya. When asked what piqued his interest in cholera, Waqo rattles off a list of questions he hoped his research would be able to answer: “Why is this outbreak (that began in 2014) different from others? Where is cholera coming from, and what makes it unique? Are there environmental factors that contribute to its transmission? Is there a genetic mutation, or several, contributing to the current outbreak?”

In a recent interview with Brittany Goetsch, a Program Officer on the Delivering Oral Cholera Vaccine Effectively (DOVE) Project, Waqo described his collaboration with the DOVE Project, his work in cholera, and how he hopes his research will inform response efforts—including to the current cholera outbreak in Kenya with 17,597 cases reported between December 2014 and July 2017.1

According to Waqo, “The outbreak popped up out of nowhere and affected many counties in Kenya within a short amount of time,” after no recorded cases of cholera in the country between 2011 and 2014.

Recently Waqo traveled to Baltimore, Maryland to conduct research with the DOVE Project—funded by the Bill and Melinda Gates Foundation and led by the Johns Hopkins Bloomberg School of Public Health. The DOVE Project works to strengthen research and surveillance capacity to understand cholera transmission and inform response efforts at the country level. Under the project, DOVE hosts visiting researchers to work alongside DOVE scientists to support critical research and capacity development in cholera surveillance and laboratory techniques.

Waqo and DOVE scientists sought to better understand the particular genomes of the cholera strains present in the current outbreak and where each genome is present through multiple-locus variable number tandem repeat analysis (MLVA). Determining which genotypes of cholera are present in each geographic area helps scientists understand how the virus is spread within and outside of countries. It also helps identify when and if a strain of cholera has mutated and what this might mean for treatment efforts. Together, the team identified multiple genotypes of cholera within Kenya, and determined that multiple genotypes are present in the same area. As Waqo explains it, “This could be why [they’re] having protracted cholera outbreaks.”

Waqo’s work also includes the development of hotspot maps that use water and sanitation and surveillance data to visualize the geographic characteristics of a cholera outbreak, including the number of reported cases, the number of reported deaths, and the spread of cholera over time. This allows countries to geographically target their response efforts. Waqo expressed the frustration that, “it’s always discouraging when you put in a lot of effort and still find the same problem recurring in the country.” But he feels hopeful that recent research efforts, including hotspot mapping and identifying genome markers of the current cholera strain, can greatly impact the cholera response by facilitating more targeted response efforts.

Waqo has seen firsthand what quality data can do to guide outbreak response efforts. In response to an outbreak in 2015, his team was able to determine that the cholera cases were occurring around a specific river that runs through the county. They did this by tracking active cases, following up with patients who completed treatment, and creating case maps. He was able to tell the response team to focus their efforts on the areas surrounding the river, and attempt to implement chlorination. Due to this guidance, cases in the county decreased significantly. “It is cases like that that really excite me about what is going on in the field,” he says. Waqo believes being ahead of the response teams is critical, and hopes his work with the DOVE Project is able to inform current response efforts.

Listen to Waqo discuss how data is used in cholera responses.